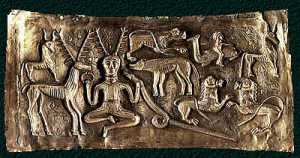 Cernunnos (center) This image is derived from a carving on the Gunderstrup Cauldron, as well as other sources, however, I would like to note that Celtic scholar John Matthews in his book The Celtic Shaman states that he believes the image on the Gunderstrup cauldron to be that of a Celtic shaman and not the god Cernnunos.

By definition, the word Pantheon means……

When we speak of Pantheons in a Wiccan Practice all of the above would be true. A specific pantheon chosen as the focus for regular working is generally of one collective whole; ie. Celtic, Greek, etc. As we offer up our devotion and honor these Gods and Goddesses in ritual and daily practice we are in essence becoming the Temple in which Deity is made sacred. And, most of the Gods and Goddesses were recognized as such because of the extraordinary feats and gifts that they exemplified.

Wicca has its roots in the Ancient European cultures, therefore, many of the Gods and Goddesses that are honored are from those cultures. This is particularly true in the case of the Sabbats of the Wheel of the Year. Another pantheon that may be used is the Egyptian, either in the Egyptian form or in the later assimilated Hellenic forms ascribed to the major Egyptian Gods. So, where do you begin?

My thoughts would be to start from your own inherent pool of genetic memory in gathering information about the Gods and Goddesses. This is not to say that someone of German descent should not work with or explore a Greek Pantheon; but often taking a first look at the geographic area(s) that are part of your ethnic heritage will open the doors to finding which Deity(ies) you most naturally resonate with. Often embedded in the rich history of your own heritage are myths and stories that may awaken within memory of times long past and Deities that will reclaim your devotion.

Another suggestion would be to think back on what time of Ancient history you were most interested in as a young student. Did the Ancient Egyptians really capture your imagination? Were the Vikings and their Gods the tales you imagined? Did the exploits of the Greek Deities take hold or did stories of the mystical Isles and lands of the Celts inspire you to ask and question more?

Selecting a pantheon to regularly work with is largely a personal and selectively based choice. Your heart and intuitive response will lead you in the right direction if you are open and willing to follow.

Generally speaking, it is not wise to mix pantheons (cultures) when doing magickal workings. There is often a natural discord that will arise and just as each culture has its own style flavor and expectations of social proprieties, so too the Deities have their own parameters. We will discuss this more in future lessons. For example: If you were to write a ritual around the energies of Brighid, choosing the God, Lugh would be most compatible. Using Toth or Odin would not be the best choice.

Most importantly, do some research on the myths and the general cultural environment of the times during which a particular Deity was honored in a space of devotion or celebration. The more information you can bring to the process of creating effective communication and differentiation of the varying energies the Deities may exude the more likely you are to connect with those energies. For example, the Goddess Hestia * (of Hearth and Home) was typically honored and asked for blessing of a new home, during the preparation of meals and to keep the hearth fires burning strongly. The Goddess Persephone was called to bring the return of Spring as Hades, God of the Underworld and her husband allowed her to return to the Land of the Living for the greening of the earth.

The most commonly used Deities you will find in Wiccan ritual and celebratory work are those of the Celtic and Greek pantheons.

Please Note: This is the briefest and most basic overview of a subject that is extensive and would be well-suited to a course all of its own. As we continue with our lessons. I will be interjecting bonus materials that will include an overview of the Egyptian and Norse Pantheons.

The Celts were inclusive of a variety of regions throughout Eastern Europe and encompassed lands stretching from the British Isles to Gallatia. Additionally, they had frequent interactions with those cultures that bordered their lands and as such held the potencies and cultural flavors of each within their own attribution of Deity. Within the Celtic Pantheon, many female deities were held in high importance, ranging from ruling, to mother to warrior goddesses. The Priestesses were highly revered and sang the dying to sleep, did charms, enchantments, prophecies, healing, etc. They knew the power of words, stones and herbs. One of the central features of their Groves was a cauldron, bowl or pool. Many of the Gods and Goddesses also held a tri-part nature.

One of the Major Clans of Celtic Deity is the Tuatha De Danann:

“In Irish-Celtic mythology, the Tuatha Dé Danann (“People of the goddess Danu”) are the Irish race of gods, founded by the goddess Danu. These gods, who originally lived on ‘the islands in the west’, had perfected the use of magic. They traveled on a big cloud to the land that later would be called Ireland and settled there…”The Tuatha Dé Danann” by Micha F. Lindemans. Encyclopedia Mythica

Important members of the Tuatha Dé Danaan are:

Dagda- The Good God; Ruler over life and death, Lord of Great Knowledge
Danu- The Mother of the Tuatha DeDanaans; Goddess of the land; Abundance; Wisdom and Teaching
Brigid(Brighid)- Triple Flame; Goddess of Healing, Poetry, Birthing and Smithing
Nuada- The Silver Hand;God of Healing; King of the Tuatha De Danaan; God of Battle
Lugh- Lugh of the Long Arm; Solar Deity; Skilled in All Arts
Dian Cecht- Physician of the Gods; God of Healing
Ogma- God of Eloquence and Learning; Speech and Language; God of the Bards
Lir- God of the Sea

The Gods and Goddesses of the Greek pantheons were very much akin to the humans who worshipped them. Most had traits and attributes that were quite human in nature and therefore very easy to identify with from a human standpoint. Unlike the Egyptian pantheon, these Deity were fully human in their appearances and were thought to frequently mingle among those of mortality. Many of these Gods and Goddesses were attributed to the energies of the planets and their natures were reflections of those cosmic entities in a form that was more closely connected to earth and the human realm.

These Great Gods and Goddesses were said to reside on Mount Olympus in Greece, and it was from this vantage point that all of human daily life and existence could be observed and on occasion interacted with.

The following list taken from a the Encyclopedia Mythica and Edith Hamiltons classic work “Mythology” gives a brief listing of some of the more frequently invoked Gods and Goddesses of the Greco/Roman pantheons:

Read More Here:
The Pantheon: An Introduction to the Greek Gods

The work we have done this month was that of opening the lens of your idea of what Deity is and the connections that can be made beyond the formalized contemplative sitting or ritual. We inhabit the space of the Divine and it is present in all of our endeavors.

As we end our study of the Divine World and Lesson Three, consider establishing a regular practice of devotion to Deity. It does not have to be a specific God or Goddess. You can focus your intent on the archetypal energy. Preparing a meal can be dedicated to Hestia (Goddess of Hearth and Home) or providing food for the birds can be an offering to the Lord of the Green and Animals. And, in its most simple form, greeting the dawn of a new day with thanks to the Sun and ending each evening with gratitude to the Moon, seen and unseen for a restful night’s sleep in her starry arms.

The Magical Pantheons: A Golden Dawn Journal (Bk.4) by Chic Cicero and Sandra Tabatha Cicero
Norse Mythology: A Guide to Gods, Heroes, Rituals, and Beliefs by John Lindow
Pagan Deities: Reference for Magickal Work & Devotion by Genna Morland
Egyptian Gods and Goddesses: The Mythology and Beliefs of Ancient Egypt by Clive Barrett
Rediscover the Magick of the Gods and Goddesses: Revealing the Mysteries of Theurgy by Jean-Louis de Biasi

The Wheel of the Year

Robin Fennelly is an Elder within The Assembly of the Sacred Wheel Tradition and also serves as High Priestess of Coven of the Mystic Path. She teaches and facilitates classes for the Pagan Experience Study Group that serves as foundation for membership within Coven of the Mystic Path. Her spiritual journey is strongly rooted in both Eastern philosophy and theWestern Magickal systems from which she has formed a core foundation that is diverse in knowledge and rich in spiritual practice. A life-long learner, her practice has evolved from the classical and philosophical teachings of books, practical experience and enrichment of this knowledge base by attending workshops of various spiritual traditions presented by master teachers. Robin formally came to the Wiccan path in 1994. Following practice as a solitary for 2 years, she dedicated to Oak and Willow Coven of The Assembly of the Sacred Wheel Tradition in November of 1996. She received her 1st, 2nd and finally 3rd degrees within the Assembly Tradition. As a teacher of esoteric and magickal studies she has used Energetic Anatomy, Tarot, Astrology, Hermetic Qabala, Eastern Philosophy, and Numerology as the foundations of her diverse selection of workshops and writings for more than 25 years. Exploration of varied energetic protocol has been the focus of her work for some time now and the information gained through direct experience informs all of her magickal and spiritual work. Robin’s writings have been featured online, and in print Internationally. She has authored several books incorporating her unique style of writing making use of poetry, prose and pathworking to enhance the concepts presented. She has taught extensively throughout the Pagan community, including Sacred Space Conference, Spring Magick, Between the Worlds Interfaith Conference and Free Spirit Gathering Festival this Summer. Her most recent project is hosting an online blogging community entitled The Pagan Experience. Robin is the owner of Holistic Embrace providing services for mind, body and spirit such as Tarot readings, Astrology reports, Spiritual Guidance and other related offerings. She lives in Eastern Pennsylvania and her life is blessed by a 43-year marriage, five children and the opportunity to work in the field of public education. Robin's esoteric writings can be found on her blogs.
View all posts by themagickalpen →
This entry was posted in YAD-Lesson Three, Year and A Day Course and tagged Deity, Devotion, Divine, Egyptian, God, Goddess, Greek, Magick, pantheon, Wicca Course-Lesson Three. Bookmark the permalink.