Posted on October 7, 2014 by themagickalpen

One of the reasons for creating sacred space is with the intent of using that space as a working container for magick. And, the act of ritual is honoring and celebrating the threads of energy and magickal working that are interwoven in our lives and abundant within a dedicated sacred space. Establishing sacred space for a ritual is saying to those entities and energies seen and unseen that you are ready to do the work of the Divine. It is at once part and the whole of the process; just as a swimmer would not rise to victory without a source of water in which to swim, or a doctor would be hard pressed to do surgery in a setting that was less than sterile and conducive to concentration.

There are many types of rituals that can be crafted. The most commonly known are those that celebrate the cycles of the Great Wheel of the Year. These are largely celebratory in nature rather than focused on a specific working. Lunar rituals are often used in support of magickal workings, such as healing, prosperity and initiations to name a few.

The Cycles of the Wheel 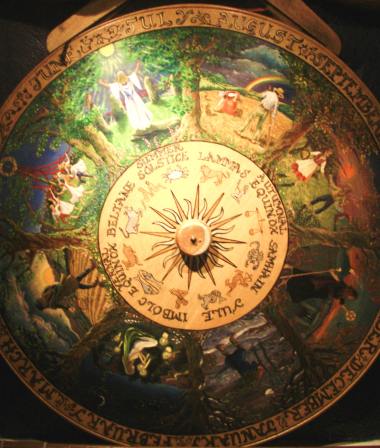 Review again what these cycles mean and think about how you would chose to celebrate a particular Sabbat. Excerpted from:

Lesson Four: Cycles of the Wheel

There are several cycles that can be used to describe the energy of the movement of the Wheel and how it aligns with the natural world. All are occurring simultaneously, even though it may appear that in a particular ritual one or another may be more apparent. Below is a brief listing of a few of these cycles:

Cycle of the Seasonal Tides

Tide of Reflection (Moving Within)
Autumn Equinox through Winter Solstice

The Equinoxes and the Solstices
Equinoxes: A time of balance between light/dark

Vernal Equinox – Spring and the season of rebirth. All things are now in their phase of growth, having passed through the periods of quickening and ripening.

Autumnal Equinox – Autumn and the season of release and harvest. All things have now passed their peak and what has been gathered makes way for what will be planted later.

The ritual of Initiation is one that marks the spiritual growth of the witch along his or her Path. It is a time of trial and test, courage and faith that propels us forward along the Path towards one of greater service and devotion. It can be likened to a spiritual rebirth and the you that emerges on the other side of that rebirth is transformed.

Rituals for healing are specifically designed to incorporate those components that will be lasting and durable in nature. New moon workings to begin a healing process and reinforcement and bolstering at the Full moon is one way to accomplish this. A word of note regarding the ethics and practical considerations of magickal working. As Wiccans we honor and respect all of life, inclusive of the decisions by free will that life may make. Doing a working of healing for someone without their express permission is unethical and a breach of their free will to make the decision yes or no that they wish outside assistance.

The same is true of sending energy to someone you perceive to be in need. Without their consent and knowledge you have intruded on their right to say no. And, lastly it cannot be stressed enough that doing a healing ritual for someone who clearly needs medical assistance and attention in lieu of them seeking that medical attention is irresponsible and foolhardy. Miraculous healings do and have happened on very rare occasions, but one should never allow ego to replace sound judgment in assuming that theirs is the magick that will cure.

We took a look at a ritual last month to cleanse and prepare our magickal tools. This can also take the form of rededicating a tool that has not been used for a long period of time of cleansing one that has been used to remove large amounts of negativity and may have built up unhealthy residue.

A Simple Ritual For Consecration of the Tools

Rituals that celebrate the turning of the seasons within ourselves are some of the most joyous rituals. Wiccanings celebrate and bless a new child’s birth. Coming of Age rites for young men and women celebrate the fertility and potential for creation and embrace the movement towards adulthood. Handfastings celebrate the married union and pledges of love that a couple makes to one another in the presence of the Great Ones. Cronings (Women) and Sagings (Men) mark the time of wisdom from year’s of experience and often coincide for the woman with the holding of the blood within or menopause. And, finally as the turn nears the point of return, Rites of Crossing Over celebrate and honor the life that was lived in this incarnation, the return to the loving arms of the Goddess and the time of awaiting new birth.

NOTE: As we continue through the course I will be adding rituals that you can do yourself and add to the Book of Shadows we will create in Lesson 7.

Foundations of Practice
Contemplative Observation – #2: The Thinning of the Veils

Next Week
The Components of Ritual

Robin Fennelly is an Elder within The Assembly of the Sacred Wheel Tradition and also serves as High Priestess of Coven of the Mystic Path. She teaches and facilitates classes for the Pagan Experience Study Group that serves as foundation for membership within Coven of the Mystic Path. Her spiritual journey is strongly rooted in both Eastern philosophy and theWestern Magickal systems from which she has formed a core foundation that is diverse in knowledge and rich in spiritual practice. A life-long learner, her practice has evolved from the classical and philosophical teachings of books, practical experience and enrichment of this knowledge base by attending workshops of various spiritual traditions presented by master teachers. Robin formally came to the Wiccan path in 1994. Following practice as a solitary for 2 years, she dedicated to Oak and Willow Coven of The Assembly of the Sacred Wheel Tradition in November of 1996. She received her 1st, 2nd and finally 3rd degrees within the Assembly Tradition. As a teacher of esoteric and magickal studies she has used Energetic Anatomy, Tarot, Astrology, Hermetic Qabala, Eastern Philosophy, and Numerology as the foundations of her diverse selection of workshops and writings for more than 25 years. Exploration of varied energetic protocol has been the focus of her work for some time now and the information gained through direct experience informs all of her magickal and spiritual work. Robin’s writings have been featured online, and in print Internationally. She has authored several books incorporating her unique style of writing making use of poetry, prose and pathworking to enhance the concepts presented. She has taught extensively throughout the Pagan community, including Sacred Space Conference, Spring Magick, Between the Worlds Interfaith Conference and Free Spirit Gathering Festival this Summer. Her most recent project is hosting an online blogging community entitled The Pagan Experience. Robin is the owner of Holistic Embrace providing services for mind, body and spirit such as Tarot readings, Astrology reports, Spiritual Guidance and other related offerings. She lives in Eastern Pennsylvania and her life is blessed by a 43-year marriage, five children and the opportunity to work in the field of public education. Robin's esoteric writings can be found on her blogs.
View all posts by themagickalpen →
This entry was posted in YAD-Lesson Six, Year and A Day Course and tagged Ritual, Wheel of the Year, YAD-Lesson Five, Year and A Day. Bookmark the permalink.