Posted on October 11, 2019 by themagickalpen 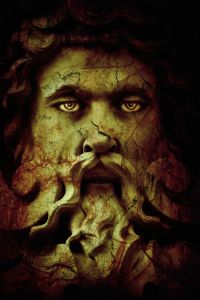 The Gods of Samhain

Every culture has stories of those beings who rule the land of the Dead. These rulers may be Gods, Goddesses, Kings, Queens, Spirits or in some case mortals who achieve god-like status. Entrance into these realms often requires more than simply physical death of the individual with trials and tests proving worth of entry being the standard. What that land/realm is called varies depending on the pantheon’s associated with that culture, but the concept of separate realms for the living and the dead remains consistent.

Most often we think of the Goddess in her form as Crone being associated with the Sabbat (Solar Holiday) of Samhain. But, the Dark God is also one of polarized energy that stands as Lord of the Underworld and keeper of the dark mysteries. Today, we are going to meet a few of those Gods. Samhain brings access to the realms of the dead in a way that is celebratory, wisdom seeking and healing. When we call forth the assistance of these Underworld deities in opening the way for communion with our loved ones and those who have passed beyond the veils of the living we are adding another layer of interaction for ourselves with a being that holds mastery over those realms to which we are not normally privy. These are but a few of the Gods who are given the task of care and keeping of the dead.

The Greek God, Hades was the King of the Underworld (that eventually took his name) and God of the Dead. He presided over the funeral rites and directed the burials to be in accord with what was due to the deceased. One of three brothers, in the division of who would rule the parts of the Cosmos, Hades received the dark domain of the underworld to rule. Most are familiar with the story of Hades and Persephone and the co-ruling as King and Queen of the Underworld during the dark half of the year and the return to the land of the living by Persephone to ensure that Spring and Summer would be bountiful.

At the gates of the Underworld, the dead were ferried across the river Styx (one of several rivers named. In the original Greek stories it was the River Archeron)) which created the boundary between the land of the Living and the Underworld of the Dead. The ferryman, Charon(os), the angel of dead had the duty to transfer the souls of the dead with a boat over the river from the world of the living to the world of the dead. It was believed that putting a gold coin under the tongue upon death, would help pay the toll for the ferry to help cross the Styx river which would lead you to the entrance to the underworld. If some could not pay the fee they were said to haunt those who did not put the coin under their departed bodies tongue.

If the deceased made it across the river they were greeted by Cerberus, the hound of Hades was a three-headed dog, who fiercely guarded the gates of the Underworld thus setting another trial in place before entry could be obtained. And, once the deceased passed beyond those gates, they were eternal residents who would be hunted down and returned to Hades if they tried to escape.

Anubis weighing the soul of the scribe Ani, from the Egyptian Book of the Dead, c. 1275 bce. Mary Evans Picture Library/age fotostock

The Egyptian God, Anubis (Greek name) or Anpu, as he was known in Ancient Egypt, was an important God of the funerary cult responsible for the mummification and guiding of the care of the dead. The priests who were responsible for the physical embalming of the deceased wore the masks of the Jackal during the process, becoming the embodied God present at the very beginning of the death process.  He is depicted as a Jackal headed-God and one of his main functions in the multi-staged journey of the dead was the determiner of the soul’s fate. The scales in the Hall of  Ma’at (the concept of justice and order) and the weighing of the heart against Her feather were guided by Anubis. Those whose heart was lighter than the feather were given their hearts (considered the most important organ in the body and the place of thought, memory and emotion) back and allowed to enter an afterlife, that had the potential for rebirth. Those who did not, had their hearts fed to much feared beast, Ammit, whose crocodile head devoured the heart and the deceased was set to roamed eternally in a place of non-existence. 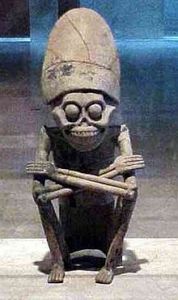 Mictlantecuhtli was an Aztec God who was worshipped throughout Mesoamerica as the Lord of the Land of the Dead-Mictlan. Interestingly, he was closely associated with owls, bats, and spiders; the staples of Halloween celebration. He ruled the underworld with his wife Mictecacíhuatl.

Mictlantecuhtli was prominent in the pantheon of the Aztecs as he would be one who all the living would meet in their journey when life left them and they came to the land of the dead. Additionally, the Aztecs believed that only those who died a violent death, people killed by natural disasters or women who perished on childbirth avoided the “face to face” with Mictlantecuhtli ad avoided the underworld. However, for everyone else this afterlife was available to all regardless of how they had led their lives.

The final resting place of the soul and its extinction was gained by a challenging and arduous 4-year journey through nine layers of the underworld. The burial rites included cremation as well as underground burial. In each case the body was given as an offering and tribute to the earth. In Aztec ritual, human sacrifice was also made at the time of the year sacred to Mictlantecuhtli, as the chosen impersonator became the God and the sacrifice of the human body was made as tribute to the God and his power over death.

Donn – Celtic “the Dark One” 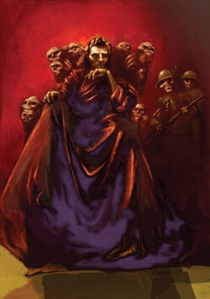 …Donn is said to dwell in Tech Duinn (the ‘house of Donn” or ‘house of the dark one’). A 9th-century poem says that Donn’s dying wish was that all his descendants would gather at Tech Duinn after death: “To me, to my house, you shall all come after your deaths”. The 10th-century tale Airne Fíngein (‘Fíngen’s Vigil’) says that Tech Duinn is where the souls of all the dead gather. In the translation of Acallam na Senórach, to go to the House of Donn in Irish tradition means to die. This suggests that the pagan Gaels saw Donn as their ancestor and believed they would go to his abode when they died. Tech Duinn may have been thought of as a place where the souls of the dead gathered before travelling to their final destination in the otherworld, or before being reincarnated…Source: Stair na hEireann:Irish Mythology.Donn began as a mortal man, son of Milesius, and member of the Milesians. The story of an invasion in Ireland by the Milesians and their fleet of sixty-five ships led by Donn is documented in the Lebor Gebla Erenn. Following a promise to the Denann kings after meeting in Tara by one of Donn’s brothers, Amergin, the Denann’s used Druid magick to ensure that their land would not fall to the Melisians and sunk most of the ships and all but three of Donn’s brothers. Donn was among the dead and because of his high status, in death he was soon elevated to the title of Lord of the Dead and came to be known as the Lord that made his home, Teach Duinn a place of death. It was also believed that the dead would roam the lands as “shades” until they heard Donn’s horn at Samhain calling them to travel from the west over the sea to the Otherworld. In some versions, Donn is allied with the sidhe (Fae) and is a Sidhe King.

Regardless of how or if you choose to use the energy of the Dark Gods, their presence remains an energetic strand in the celebration of Samhain and its connection to the varied final resting place of those who have crossed the veils.

Tomorrow: The Charge of the Dark God

Robin Fennelly is a Third Degree Initiate within The Assembly of the Sacred Wheel Tradition and serves as High Priestess of Coven of the Mystic Path. She teaches and facilitates classes for the Pagan Experience Study Group that serves as foundation for membership within Coven of the Mystic Path. Her spiritual journey is strongly rooted in both Eastern philosophy and theWestern Magickal systems from which she has formed a core foundation that is diverse in knowledge and rich in spiritual practice. A life-long learner, her practice has evolved from the classical and philosophical teachings of books, practical experience and enrichment of this knowledge base by attending workshops of various spiritual traditions presented by master teachers. Robin formally came to the Wiccan path in 1994. Following practice as a solitary for 2 years, she dedicated to Oak and Willow Coven of The Assembly of the Sacred Wheel Tradition in November of 1996. She received her 1st, 2nd and finally 3rd degrees within the Assembly Tradition. As a teacher of esoteric and magickal studies she has used Energetic Anatomy, Tarot, Astrology, Hermetic Qabala, Eastern Philosophy, and Numerology as the foundations of her diverse selection of workshops and writings for more than 25 years. Exploration of varied energetic protocol has been the focus of her work for some time now and the information gained through direct experience informs all of her magickal and spiritual work. Robin’s writings have been featured online, and in print Internationally. She has authored several books incorporating her unique style of writing making use of poetry, prose and pathworking to enhance the concepts presented. She has taught extensively throughout the Pagan community, including Sacred Space Conference, Spring Magick, Between the Worlds Interfaith Conference and Free Spirit Gathering Festival this Summer. Her most recent project is hosting an online blogging community entitled The Pagan Experience. Robin is the owner of Holistic Embrace providing services for mind, body and spirit such as Tarot readings, Astrology reports, Spiritual Guidance and other related offerings. She lives in Eastern Pennsylvania and her life is blessed by a 43-year marriage, five children and the opportunity to work in the field of public education. Robin's esoteric writings can be found on her blogs.
View all posts by themagickalpen →
This entry was posted in 30 Days of Samhain, Hall of the God and tagged Dark Gods, The Dark Gods. Bookmark the permalink.